A day of Clumsiness 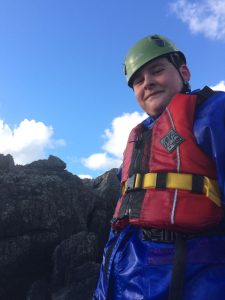 The story begins on Wednesday evening in the courtyard for Jacob and the store cupboard for me. We were on opposing teams with different activities, one we had to get a ball out of a pipe using only water but PLOT TWIST the pipe has holes in it and we had to work together to block the holes and get the ball out, getting completely drenched in the process, at one point (in Jacobs group) every one let go of the holes and left Mabel  hugging the pipe. The second activity we had to create certain shapes out of rope but PLOT TWIST (again) we were blind folded. At the end everyone was up against each other, in this game we had to get from one side to the other using tiles of carpets but PLOT TWIST(ok that’s the last one) if a tile was left unattended The swamp monster (Miss Webster and Keith) would take them and decrease our number of tiles to use, in Jacobs group Alex almost lost the entire game by picking up tiles at the end instead of going straight over the line and also blocking himself (thanks to Mr Swamp Monster) away from the end.

The next day the hailstones (the best group) went on a 45-minute drive to the coast. We started with a bit of rock climbing. clambering over a wall, me with the speed of a seal with crutches and Jacob going the speed of a gorilla on steroids (that’s fast). On the other side of the magical wall, we walked down a special path. At the end of the special path, was a small rock face. This was a challenge. We paired up and had to direct each other as were to put our hands and feet, with multiple “power slides” (slips).  Moving swiftly on we went around rocky rock pools and had a break shortly after. To get to the top of the cliff we had to go through the claustrophobic cave of claustrophobia (try saying that three times fast). At the top of the cliff, we went back to the van for a spot of lunch. After lunch, we walked down another special path (this is another special path but this one is not so special) and arrived to find Mary (Our instructor) on an island with ropes between the island and our path area. We had to get to the island using harnesses and the rope. We were taught how to do a backflip (sort of) on the rope. Getting to the other side was fun yet hard and only Jacob and Aenea did the backflip. We then had a gander through the rocks. During our little gander, Jacob managed to lose his shoe down a little cavern, but fear not for I, Adam, managed to save the shoe (shoe saver, I am considering putting an advert in the paper for shoe saving). The day was coming to a close and we got to jump into the sea, I did a cannonball and Jacob persuaded Mary to let us dive in. The day had ended, and Rachael had managed to slip only twice, a record, and now we’re in the lecture room writing about our day. 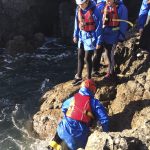 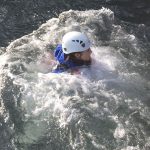 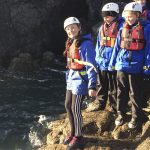 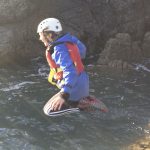 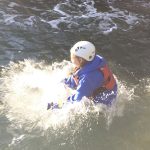 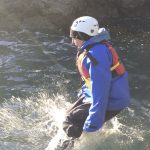 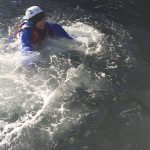 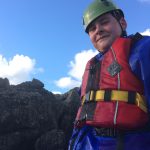 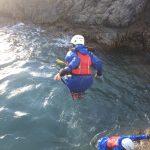 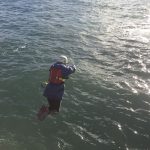 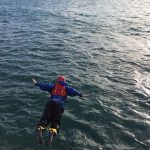 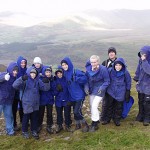