On Tuesday we climbed the very difficult mountain called Tryfan the mountain is only 915M high but you need to scramble up the whole mountain straight from when we stepped out of the car park, we were climbing over huge rocks and boulders. The weather was not that bad when we started. We got about half way up the mountain and had a bit of lunch and then it started to rain very heavily so we had to put our water proof clothes on which was very hard because we were already wet and it was hard to get the trousers over our boots. The weather was terrible and it was raining really badly and there were really high winds. With the winds and rain it got very hard to climb the mountain. When we got very near the summit we had to stop for lunch on a very steep and slippery hill because we were protected from the wind there, but not the rain. Many of us got soggy sandwiches 🙁 When we got to the top of the steep hill we started to get blown away by the very high winds. We then had a short trip over some rocks and boulders to get to the summit ( Adam and Eve). Adam and Eve are the two large parallel rocks at the summit which look like people from a distance. We stopped for a minute at the summit and then started our decent down the sister path to the one we had lunch on, this was not so steep but still slippery. By this time the rain was chucking it down and we were drenched, Mr. A said it was the hardest rain he had ever walked in. When we got to a man made path at the bottom of the slippery rocks we started another decent. This was on grass which was very slippery and lots of people fell over, even Mr. Alderson. Melissa decided the fastest way down was by sliding on her face.  When we got to the bottom of the path, after many falls, we started to walk over the rocks to the minibus. When we got back we had to sit in our wet waterproofs which was a horrible feeling.  We got back to KMC and the seats were very wet! 🙂 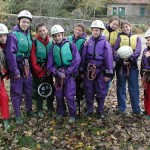