An early rise to the morning, we finished breakfast and made our way to the meeting room. surprised not to actually see our instructor in there, we wondered what the day ahead was going to be like. Mr White and vending machine (tom) unfolded a huge map of the Snowdonia National Park onto the table. Mary then walked through the door and we started to find out more about how to map read and what the symbols meant.
We finished the talk, and got going as quick as we could. We had a small delay as Gabriel’s hiking boots were completely filled with water and Jacob forgot his water proofs once again. On the way we decided to have a sing-song with everyone to some “popular” music. We eventually got to our starting point, where we then found out we were being left alone having to navigate ourselves over 7km.
We began our trek up a steep road to find ourselves at the first junction. We were confident that we had to turn right so we walked for between 5 to 10 minutes before vending machine (Tom) mentioned us taking a wrong turn. We had never been so annoyed with ourselves, so we walked back to the last turning off point and figured out the correct way.
About half way through the first section it started pouring down with rain. We got drenched. It was ridiculously muddy and sticky almost everyone got stuck, we were plastered up to the knees with mud and had never been so soaked. After all the hassle with Mud we finally finished the first section of the navigating.
The second section went fairly quickly as everyone got to the point where they didnt care whether they were wet and muddy so we didn’t bother stopping as much as we usually would. We were almost finished when Gracie tripped and twisted her ankle , so Gabriel told everyone to pretend they had an injury so we could skip the final section. We failed to complete the task of faking an injury and had to carry on 🙁 At the final point of the second we sat down and had lunch, believe it or not we ate under a big yellow sheet which did actually keep us fairly warm. Vending machine (Tom) started to film a vlog when Jacob decided to blabber on about god knows what.
Last section, still drenched, still raining, however the mud slowly started to stop. This final block was less effort as it was a flat surface or down hill the whole way. We staggered onto the slippery rocks that had a boggy drop down into the quick flowing stream. We managed to cross the railway track after getting soaked a second time from more rain, when we came to a huge field with cows and sheep. A few people were in front of us going for a leisurely walk, when they found themselves letting out around 30 cows through the unlocked gate. Swiftly moving ourselves around the cows we finally made it through the trek of 3 difficult but exciting tracks.

By Summer Stocker and Gracie Chapman 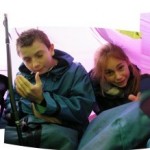