I have a few hobbies, my main hobby being Climbing. I am part of the Dane court climbing team and train regulary at the school wall. I visit Harrisons rocks at southern sandstone at a few weekends a month. I also enjoy computing and gaming(xbox 360). I am really looking forward to the kmc as many climbing friends have said it was a great trip.

Today was our highest mountain climb. We took a path called the Pyg on the way up which was named after the closest building to the bottom of the path, who’s initials were p.y.g. Mount Snowdon is 1085M tall, the highest mountain in England and Wales. Ten minutes into our ascent we were forced to stop to put on our water proof clothing because the rain started straight away, not scheduled until after lunch. We were faced by many waterfalls during our trip created by the rainfall. We had to step over the water falls, which were very slippery. Some people had a drink from the fast flowing waterfalls. When we were near the summit we found a finger stone ( a large post marking junction in the path) with lots of coins (mostly Pennines) stuck in it. When we past this it was about 20 minutes from the summit and we had a very windy journey up the last leg to the summit.

When we got to the summit we saw one of the Snowdon mountain railway trains. As you can see in the picture of the summit we were very wet and it was extremely windy. Dan Wells was on his knees at the summit because of the wind and height. 🙂 We walked down from the summit and walked past the Snowdon café, now closed for winter. We took the long Miners path back to our minibus. The path was quite well built and easy to walk on but very tiring. We got to the minibus shortly behind the other group who we saw coming down from the summit. We were soaking wet because of the rain and wind but we had a 10 minute minibus ride back before we could get dry. It was a great achievement being at the top of Snowdon and also being the highest person in England and Wales who was standing on the ground. On the way back we went through the Llanberis pass which was a spectacular veiw. When we got back we put all of our clothes in the drying room and went for dinner. After dinner a group of 9 went to the climbing wall, including Sam and me. When we got back we had a hot drink and went off to bed for the end of a very tiring day. 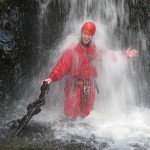