Wheels on the Bus

On this fine day or not so fine in the morning we woke up at the breakfast bell. Today we were probably the most tired we’d been so far when waking up, but the idea of getting soaked in the gorge changed that.

After breakfast we were told that we were going to go gorge walking. It was about a forty-five minute drive to the gorge, we were so tired we (Charley and Róisín) fell asleep. After a bit of lunch we got off the bus and had to get on our harnesses which like yesterday made Charley feel like Spiderman…

We went through the forest and found the bottom of the gorge, which was full of rocks and lots of small waterfalls with a huge one at the end. It didn’t take long before we started slipping off Elliot, being the first man down. It was pretty challenging to get up at parts but the worst bit was definitely the first time you fell in one of the pools and the cold water got into your boots! When we were about 1/3 of the way up Louise set up another zip wire thing between two of the rocks which was really fun.

Next we went up a few more waterfalls which were hard because we couldn’t see where the next rock was and sometimes we had to pull ourselves up. Next Louise said we could go the easy way or the hard way and we ended up going through the elephant butt. It was basically just two huge rocks leaning against each other half in water with a pretty small hole in the middle. We had to sit down up to your waist in FREEZING water and slide through the hole which was quite scary because we were worried we couldn’t get through half way. It was optional but most of us did it anyway. We then climbed up another small waterfall slipping another few hundred times. When we were pretty close to the top, we took off our harnesses and left them on a patch of grass, it was great not needing to carry them anymore. Going up the last few waterfalls was hard as there was so many deep parts which we didn’t know were there so we fell into pools almost up to our chest. D:

Once we got to the top we climbed along some of the rocks and slid into the water. We walked underneath the waterfall on stepping stones and there was a gap which was the shape of a chair which was really cool because we could sit in it and stay dry for a few precious seconds before getting into the really deep pool. We thought there was more stepping stones but there wasn’t so we were both on the last one screaming at each other not to let go because we didn’t want to get cold. Eventually we manned up and pushed each other in. We were standing neck deep in the freezing water as Kaan floated past us on his buoyancy aid and couldn’t get back up. We wish we could say that we helped him.

Then we swam and walked awkwardly full of water to the water fall we had recently climbed and slid don it like woooossshhhhhhhhhhh and then we climbed back up for another go! We then climbed down more of the smaller waterfalls that we had climbed up to start with. Once we had finished and Kaan had finished floating we got back to the grass patch where we had put our harnesses previously. Then we walked down the slope where we met the other group and we walked back down to the car park. We got dressed in the woods, the girls on one side and the boys on the other.

Back in the coach we had more lunch before driving back to the centre. Today charley decided to sing the wheels on the bus again in attempt to get them to put the radio on of course every one joined except an odd few (Kaan bashing his head against a window).  After the tenth verse we admitted defeat and gave up. Kaan was hitting Róisín with his hat so she stole it and he went metal but he EVENTUALLY got it back. 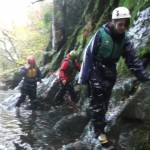 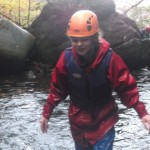 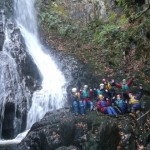 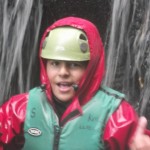 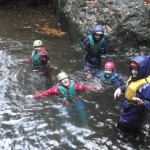 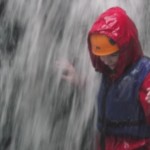 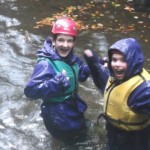 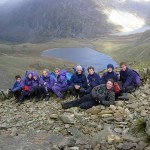