Today we were trekking up the very daunting mountain formally known as Snowdon. Snowdon is 1085 metres above sea level. Some people say being small is an advantage, and in many cases it is, like getting through small spaces or getting a kids bus fair, but when it comes to trekking up mountains this can be a bit of a disadvantage. Trust us, we know! First we went up Pyg path, which was not too bad but was a bit steep and tiring. As we got further up it got, let’s just say it was more than a little bit gusty, in other word gale force winds which tried it’s best to throws us off the mountain. During this there were many times where we nearly fell off the mountain and we had to support each other. Soon it got too dangerous and we had to head down, this is easier said than done. Walking down this very steep slippery bank, with gale winds and tons of rain, not what I would call fun. Slipping and falling all over the place and various people (me and clover), very kindly George (Kup) grabbed the back of my back pack as I was getting swept all over the place and nearly pushed over as well as me (Clover) almost get pushed off the side of the mountain by Vicky who had been pushed herself. We had a very amusing lunch in a yellow parachute like tent thing, which we had to sit on so it wouldn’t fly off, it felt like we were in a steam bath as it steamed up so badly. We headed back to the van on the path called Miner’s path, this was much easier than the way up. As expected we were all wet and windswept when we got back to the van. We were all rather relieved the we were sitting down and soon returned to find we were back first once again so we all had a nice hot showers. So over all it was a rather eventful day! 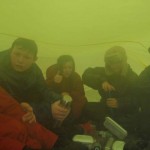 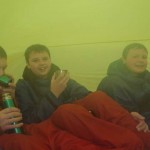 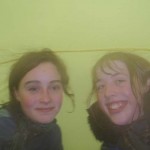